Filmmakers and Insurance: What Moves You 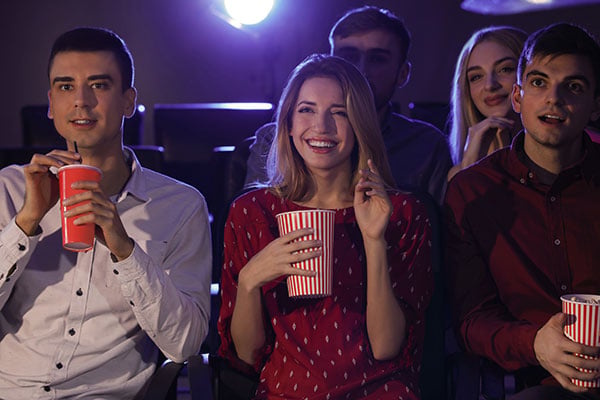 More than 100 years after their invention, “moving pictures” still seem to command our collective imagination. We often have very personal emotional attachments to movies: we say that certain films inspired us, moved us, shaped our childhood, shocked us, or opened our minds.

What is unique about the medium of film? What explains this continuing fascination despite all the other technological delectations our age offers up? Is it because film promises us a total escape from the everyday? Provides deep insight into the human condition? Or is it simply good entertainment?

Probably, it’s all of the above. 2017’s total box office results were the highest in history, with over $39 billion in takings worldwide despite the fact that public attention is more divided than ever, with video games, streaming services, and downloads all vying for a slice of their entertainment dollars. Clearly, movies aren’t going anywhere.

What is changing is the way content is delivered. Creators are both rapidly influencing, and being influenced by, new technologies. This is not anything new: the history of film is one of periodic disruption followed by renewal in response to the changing tastes of audiences.

Early “talkies,” which began to appear in the mid-to-late 1920s, were often compared uncharitably to earlier, silent films. Critics often felt that the spoken dialogue made for tawdry, artistically inferior pictures. Audiences loved them, however, and by the early 1930s, the majority of films were being produced with sound.

Starting around the same time and lasting until the late 1940s was the Hollywood “studio system”—a system of production characterized by complete vertical integration of the production process. The studio system totally dominated filmmaking during this period. Studios “owned” talent, cast was repertory, and filming was done mainly on elaborate sets or backlots rather than on location. Props and sets were also frequently recycled through various productions. Many venues were owned by studios, who could thus control when, where, and for how long a film screened. Theatres that were not studio-owned were subject to a practice called “block booking” in which they were required to take on and screen entire slates of lesser-quality films from a studio in order to obtain screening rights to a single anticipated hit. (This is where the term “B movie” comes from).

As might be expected, this arrangement provided steady and reliable revenue for the studios. The big stars of the time were household names. Studios were nicknamed “Dream Factories” due to their ability to quickly churn out genre favorites—westerns, musicals, romances. Fantasy and spectacle were favored over realism, and audiences gobbled them up. But new technology was already sowing the seeds of change: the rapidly growing popularity of television, as well as a landmark antitrust case in 1948 which forbade studios from owning movie theatres and curtailed the practice of block booking, placed the film business on shaky ground by mid-century. The severe slump which ensued was not truly reversed until 1972, the year The Godfather was released.

The collapse of the studio system was both good and bad. As major studios were no longer guaranteed a theatrical release for their films, they became more risk-averse, tending to focus on properties they knew would make money. On the other hand, the proliferation of smaller studios and the uncoupling of distribution from production allowed many up-and-coming directors to make their mark. The 1970s ushered in the emergence of a raft of American auteur directors—Robert Altman, Martin Scorsese, Francis Ford Coppola, Roman Polanski, and Stanley Kubrick among them. These directors were influenced by European art-house cinema of the 50s and 60s and approached filmmaking with a markedly different aesthetic. Their films featured greater realism and frequently controversial subject matter. Like their European contemporaries from decades past, more scenes were shot on location. Dialogue was less frequently dubbed. Increased emphasis was placed on characterization and dialogue.

Simultaneously, and progressing in a completely opposite artistic direction, another trend was taking shape: the “Hollywood blockbuster.” Designed to maximize ticket sales for large studios, these films featured larger-than-life spectacle and action, supported by cutting-edge technology and special effects. Star Wars (1977) represents the most obvious example of this phenomenon. Audiences flocked to the cinema for the first time in decades to be part of an experience they could not replicate with equipment available at home. The modern action-adventure spectacle was born (and continues, in the guise of the ubiquitous superhero movie).

The 1980s accelerated these changes in filmmaking. Major studios could no longer afford to back a loser, so often doubled down on grand special-effects laden productions that audiences would be guaranteed to love, or else reliable franchises such as Rocky, Rambo, Indiana Jones, Friday the 13th,, A Nightmare on Elm Street, etc. The advent of home video technologies such as VHS and Betamax meant that a significant proportion of a film’s income now came not from box office, but home video revenues. This further opened up the playing field, as it was now economically viable for a small independent producer to market their film “direct-to-video” and make a profit.

Cut to the present day where, in addition to the multiplex, you can now watch a film on your phone, tablet, smart TV, portable music player, or game console. Streaming services are the latest disruptive innovation and have changed the way episodic TV content, for example, is presented (no more “previously on…” and no more commercials). It’s arguably never been easier for a creator to get their work out there.

Audiences flocked to the “dream factories” of the Golden Age of Cinema because there’s no magic like film magic. This hasn’t changed, and we don’t think it ever will. Film is the only medium that has the ability to inspire both our intellects and our hearts while completely engaging our senses.

At Front Row Insurance, we are “Passionate about the arts…better at insurance.” We love creatives and the creative work that they do. That’s what moves us. What moves you? Whatever it is, we probably have a policy that will suit you. Contact us.

THE BEST CAMERAS FOR FILMMAKING

HOW TO PROTECT YOUR CAMERA LENS(ES)