It may be fruitful, then, for filmmakers and film producers to consider how their productions could be simplified and scaled down. Sometimes this may be possible; sometimes it may not.

Of course, we realize that a movie originally planned to be the next Michael Bay-style action blockbuster can never realistically be scaled down to Rear Window size. However, filmmakers are – by their nature – creative individuals, and they just may surprise themselves with what is conceivable if they really take on this challenge to rethink their production scale.

Arguably, Hitchcock’s best film, Rear Window [Amazon Affiliate Link] involves Jimmy Stewart’s photographer character confined to a wheelchair in his apartment. He gets curious about the neighbours in the building across the street, and a murder mystery ensues.

Rear Window was shot entirely at Paramount Studios on a large set replica of a Greenwich Village, NY courtyard. 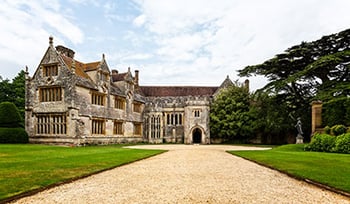 Another fun mystery movie that was filmed on a small scale is Sleuth [Amazon Affiliate Link], starring Laurence Olivier and Michael Caine. The plot involves Caine asking Olivier to divorce his wife so that Caine can marry her. Rather than simply granting this request, Olivier’s character decides to play a game, “a game with potentially deadly consequences.”

The film was shot primarily at Athelhampton House, Dorset, England (pictured) with some of the interiors recreated at Pinewood Studios.

The film was remade [Amazon Affiliate Link] in 2007. 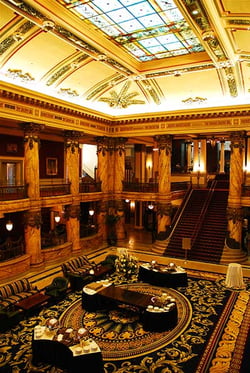 It’s true, “two guys sitting at a table talking over dinner” doesn’t sound like a great movie idea and we can only wonder how it ever managed to get financed. Nevertheless, get financed it did, and it’s actually a pretty good movie featuring some interesting philosophical conversations about life, mortality, theatre, spirituality and more.

The minimal, artificial set – with no pretense of looking anything like reality – is jarring when you begin watching the film, but eventually, the obvious artifice of the set gives way to the story and the solid performances.

Roman Polanski’s Death and the Maiden [Amazon Affiliate Link] is a suspenseful thriller film based on a stageplay. The plot concerns a political activist (Sigourney Weaver) who is convinced that her guest (Ben Kingsley) is a man who once tortured her for the government.

The film was shot mainly in one interior location in France, with a few exteriors in Spain.

Wait Until Dark [Amazon Affiliate Link] involves a blind woman (Audrey Hepburn) being terrorized by a trio of criminals while they search for a heroin-stuffed doll they believe is in her apartment.

The movie was shot primarily in a Manhattan apartment, with some studio interiors shot in Burbank, California.

Al Pacino arguably gives one of his better performances in this crime drama film where he plays real-life criminal John Wojtowicz, who purportedly robbed a bank in 1972 in order to pay for his lover’s sex reassignment surgery.

Dog Day Afternoon [Amazon Affiliate Link] was shot primarily at a bank in Brooklyn, NY that no longer exists. Some exteriors were filmed near Prospect Park.

This political drama film [Amazon Affiliate Link] imagines what might happen if the US president gets holed up in a diner during a freak snowstorm and has to deal with an escalating nuclear crisis at the same time.

The movie was filmed entirely in a diner (set in Colorado).

This American drama film [Amazon Affiliate Link] starring Ethan Hawke and Uma Thurman is based on a play of the same name. The simple plot involves three old high school friends meeting in a motel room and dissecting painful memories from their past.

The movie takes place in real time and was filmed entirely in a single room in New York. 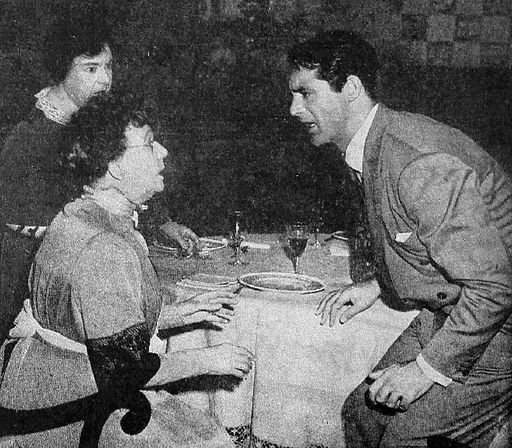 This Frank Capra screwball dark comedy [Amazon Affiliate Link] based on a stageplay concerns a writer (Cary Grant) whose aunts turn out to be serial murderers who poison aged bachelors “to end their suffering”.

The film was shot entirely in the Warner Brothers Burbank Studios in Burbank, California.

Hopefully, some of the above examples can inspire filmmakers and film producers to think about how to sufficiently amend the scale of their projects (if feasible) to enable them to more easily move forward in this ongoing COVID pandemic environment.

About: Front Row Insurance Brokers Inc. is an independent insurance broker that provides film insurance for a very low cost. Should a claim occur, Front Row works diligently with clients and insurers to expedite the payment of claims.

Amazon Associates Disclosure: Front Row Insurance is a participant in the Amazon Services LLC Associates Program, an affiliate advertising program designed to provide a means for sites to earn advertising fees by advertising and linking to Amazon.com. This post may contain affiliate links. There is no additional cost to you.

Arsenic and Old Lace photo: This work is in the public domain because it was published in the United States between 1925 and 1963 and although there may or may not have been a copyright notice, the copyright was not renewed. https://commons.wikimedia.org/wiki/File:Jean_Adair_Josephine_Hull_Cary_Grant_Arsenic_and_Old_Lace_1944.jpg