There is nothing like a night out at the theatre. 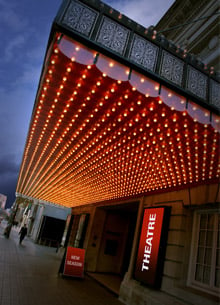 Getting dressed up in a fine outfit. Hiring a babysitter for the kids. And being swept away in a dark room that allows you to forget about real life, if only for a few hours, is well worth the price of admission. The idea that anything could shatter the illusion is unconscionable. “What could ever go wrong?” you might ask. At a UK production of “Grumpy Old Women,” the audience found out the hard way.

At Cheltenham’s Everyman Theatre, the audience was evacuated due to a pyrotechnic mishap that occurred well before intermission. Frustrated theatre goers spilled out onto nearby Regent street as firemen arrived promptly at the scene. Despite its challenges, like many great stories of the theatre, this one has a happy ending.

Ultimately  the fire was put out and the show went on as planned. Since we’re in the insurance industry however, let’s have a look at some hypotheticals.

More than almost any other hazard, fire shows just how important it is that a theatre carry good production liability insurance. Had the pyrotechnic mishap gotten out of control the damage to property and, more importantly, people could have been immeasurable. While key person insurance would have protected the lead actors, and the company’s theatre insurance would have covered sets and costumes, without the proper liability limits, an out-of-control fire is enough to draw the curtain on any business due to its potential to cause personal injury. Furthermore, one production’s damage to a theatre has implications for said theatre's future productions and revenue streams, all of which need to be protected.

At Front Row, we always make sure our theatres have air-tight insurance coverage in every respect so that ‘potential disaster’ is reduced to ‘minor inconvenience.’

We have an easy online low cost insurance solution for Canadian producers who are renting theatre space and equipment for a short period: