Let’s review some of the best filmmaking schools in Canada.

TMU's Film Studies 4-year BFA (bachelor of fine arts) program is a mix of theory and applied work, with a bit more emphasis on the applied. Students will take the standard film theory courses in the first few years of the program, with the final few years more focused on the creation of short film/video projects, namely the students’ “thesis film projects” in fourth year.

The program includes courses on cinematography, directing, design composition, screenwriting, and the business of film. The school has a “film cage” where film/video equipment can be borrowed by students working on school projects, but try to book early as the equipment can run out fast.

The faculty is decent, although some professors have a lot more relevant industry experience than others do. Notable alumni include filmmakers Jeremy Podeswa and Bruce McDonald.

The Toronto Film School offers diplomas. It has an excellent reputation as a solid applied arts institution. The majority of the teachers comprising the school’s faculty are known for having film industry experience.

Courses cover editing, cinematography, audio production, camera and set procedures, screenwriting, budgeting and scheduling, and more. Following the completion of the film production diploma, students have the opportunity to apply for a work placement.

The school has four campuses throughout the GTA.

Courses include Intro to Filmmaking, Film Art, Editing Techniques, Production Planning and Management, among others.

Sheridan's Honours Bachelor of Film and Television (BFTV) 4-year degree includes a work placement to prepare you for a career in film and television.

Courses include History of International Cinema, Introduction to Directing, Transmedia Storytelling, Business of Film and Television, Editing, Cinematography, and more.

Concordia University’s Mel Hoppenheim School of Cinema is certainly Quebec’s most well-known and respected film school. It was established in 1976.

This Montreal-based school accepts about 200 students a year for study in the fields of animation, film production or film studies. Each track confers a separate BFA degree.

The National Institute of Image and Sound (INIS)

The National Institute of Image and Sound (INIS) is a professional training centre based in Montreal, QC that offers programs in film, television and interactive media.

INIS is a non-profit organization incorporated in 1990 and financially supported by the Québec Ministry of Culture and Communications. INIS has also received sponsorship support from Globalex/Front Row (workshop: Ateliers Transmédia Globalex). This workshop is intended to prepare students for transformations brought about by new platforms in the field of audiovisual production and distribution. Linda Dubuc has been invited to speak to INIS students as an expert on film production insurance.

Certainly, the most well-known film school in Western Canada would be Vancouver Film School (VFS). The school offers 12-month diplomas and it has “pathway programs” to bachelor’s degrees with universities, including Capilano and Wilfrid Laurier.

InFocus Film School offers a 1-year film production diploma program and a 1-year advanced documentary production program, among other diplomas and certificates. The school offers mentorship from working industry professionals. These programs are fast-paced, intensive and focus more on applied work; the promise is that students will "make 12 films in 12 months".

InFocus also offers a summer film boot camp to "become a filmmaker in just one week". This boot camp teaches how to direct, shoot and edit like a professional filmmaker. The school was founded in 2010.

Simon Fraser U / film schools in BC

Simon Fraser University has a 4-year BFA film program in their School for the Contemporary Arts. The program is interdisciplinary and – like TMU – includes a blend of theory and applied work. In every year of the program, students make their own films, while also taking academic film studies courses.

Langara is a public degree-granting college in Vancouver. The college takes its name from the neighbourhood in which it is situated. 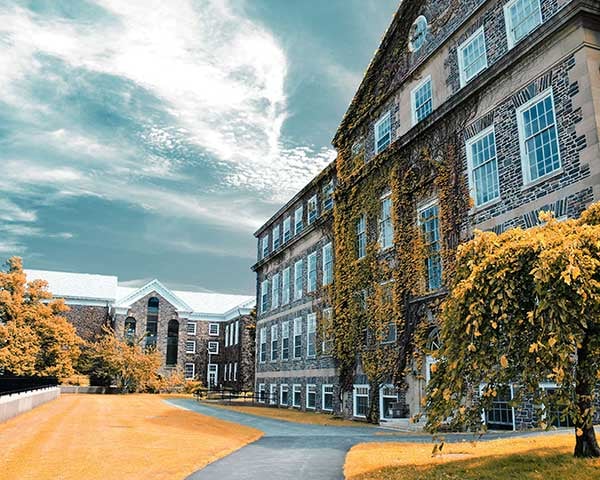 Dalhousie has a BA in Cinema and Media Studies. The program is more academic in nature, with a focus on theory, the analysis of visual language, film history, etc.

However, the program’s associated School of Performing Arts enables enrolled students to engage in “experiential learning for academic credit through placement with an established organization in the field of cinema and media.”

Faculty teach a mix of courses on topics such as film aesthetics, video gaming, international cinema and filmmaking. U of M students have access to the Media Lab, a post-production space, as well as film production equipment, including digital cameras, sound recording gear, and more.

A Prairie film program is the one at Red Deer College (RDC) in Alberta – they offer a Bachelor of Applied Arts in Film. RDC has 20+ years of experience offering programming in film production.

The college has its own 100-seat cinema, dedicated sound stage, and equipment facilities.

The practicum in the fourth year of the program involves gaining industry-related work experience.

If you are in film school or thinking about going, you’ll almost inevitably end up working on short film/video projects that will require insurance. Consider Front Row’s online policies.

Front Row’s Short Shoot insurance policy is a good option for insuring these short-term film school projects. Coverage for up to 15 consecutive days of filming. You can get a quote in two minutes and purchase a policy 100% online.

Front Row’s DigiGear insurance policy is a good option for insuring your filmmaking gear, including your film camera(s). You can get a quote and purchase a policy online in five minutes.