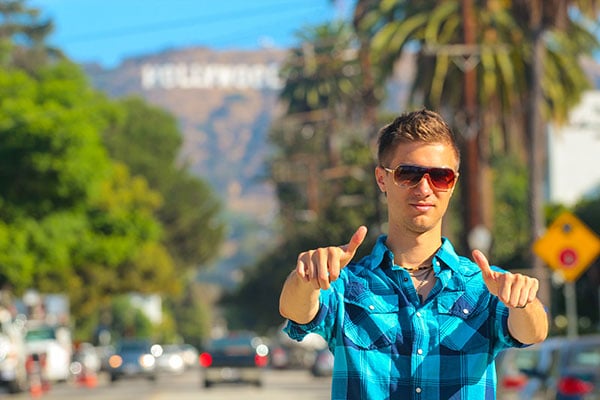 If you have ever been a part of a production that was shot in the Greater Los Angeles area, you have more than likely worked with Film LA. Film LA is the permit authority for all productions taking place in and around Los Angeles County.

Obtaining a permit in Los Angeles is different from most other parts of the US. They not only have specific insurance requirements, but they also have an online insurance verification system known as KwikComply. If you need to obtain a permit, you must have your insurance agent submit on your behalf.

When you are new to working with Film LA, it can seem overwhelming and frustrating at times. There are many steps that are unique to the Greater Los Angeles area.

We have collaborated with Film LA to show you the “Do’s and Don’ts” of obtaining a film permit in Los Angeles. 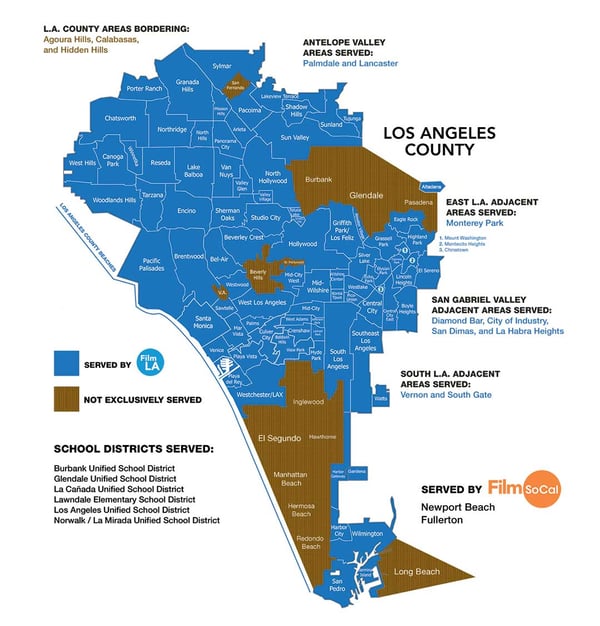 Source: Film LA (Above image can change frequently as Film LA updates their areas served when they begin working with new clients. Potential customers should still check with Film LA to eliminate any confusion and ensure accuracy.)

Film LA’s insurance requirements are constantly changing due to regulatory decisions from the State of CA. When speaking with one of their reps, they recommended double-checking their website to make sure you are aware of any new changes.

An example of a new insurance requirement in effect July 1st, 2020 is that Workers Compensation is required on all productions. This is due to the CA AB5 (California Assembly Bill 5) that was passed in the beginning on 2020.

This is a state statute that requires employers to treat independent contractors as regular employees unless they pass a three-part test. This means offering medical and workers compensation coverage.

Example of who would/wouldn’t need to be supplied workers compensation coverage under CA AB5:

Nike can hire a videographer as a 1099 (contractor) to work on a commercial or event since video production is not related to making shoes, but if your business is filmmaking, anyone who works with you in production is an employee, such as a camera op or production assistant. The businesses must be fundamentally unrelated.

DO: CHECK OUT THE RESOURCES FILM LA HAS TO OFFER

Film LA has a great resource page for productions of all size. They have information on the California Film Commission, where you can apply for a CA Film Tax Incentive, local contacts, and software made specifically for filmmakers, such as MYLA311, which is an app with a useful directory of LA city services and phone numbers

DO: LOOK FOR AN INSURANCE BROKER THAT SPECIALIZES IN PRODUCTION AND ENTERTAINMENT INSURANCE

As much as you may like your agent who bundles your home & auto insurance, production insurance is a specialized niche of insurance. Make sure to do your research before binding coverage. Review their website – see if they specialize in entertainment; if not, they may not know how Film LA requires insurance verifications.

See Front Row’s US homepage for the US film insurance products we currently offer.

According to Film LA, “The base fee is $699 USD and from there it will increase. Most commonly, a typical, single location permit in the City of LA will run about $957 USD at the minimum. Because of the uniqueness of each production and the permit they pull, we cannot provide a hard range of fees. I have seen permits in the tens of thousands of dollars and I have seen permits for as little as $784 USD.” (pricing subject to change)

DON’T: SAY “NO” TO A WAIVER OF SUBROGATION

A Waiver of Subrogation is a requirement of Film LA. It is a contractual provision whereby an insured waives the right of their insurance carrier to seek redress or seek compensation for losses from a negligent third party.

Be sure to let your agent know that this waiver is needed before coverage is bound.

Adding this waiver to your policy will add additional premium and may take more time for the insurance company to endorse. Note: Receiving this endorsement from the insurer can take anywhere from 24-48 hours.

DON’T: WAIT UNTIL THE LAST MINUTE TO SECURE A PERMIT

This process of obtaining the correct insurance coverage, your agent submitting your coverage through KwikComply, getting approval from the City of Los Angeles and Film LA… this all takes time. Having your agent properly quote, bind and submit proof of coverage will take a minimum of 24 hours.

So, keep in mind: if you have a shoot on Saturday, you may not be able to secure coverage if you call your agent on Friday afternoon.

DON’T:  ASSUME ALL OF LOS ANGELES COUNTY HAS THE SAME INSURANCE REQUIREMENTS