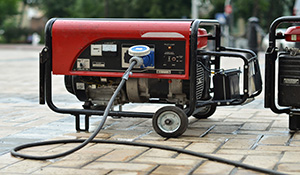 Powering a film production is an expensive business. Your typical power set-up is a centralized grid, involving at least one or two 400A diesel generators. That number can rapidly rise to 20 on large, high-draw productions. This ‘overpowering’ of film sets has been the status quo for decades.

“Diesel generators have made us pretty lazy with our math - we basically just add up the lights we have and supply enough power to turn them all on at once, all day long, with lots left over for heating up all the snacks”
– Kerri Coombs, Vancouver Gaffer

A single generator emits a noise level of 73 decibels – louder than a standard vacuum cleaner – and 2.6 kg of CO2 per litre of diesel burned. As a result, they must be placed far enough from set to avoid being picked up by sound or damaging air quality and the health of the crew. This practice has a number of challenges.

Rigging crews spend days setting up hundreds of feet of three-phase seaway cable or 4/0 heavy gauge cable to transmit power to set, as well as mats to ensure traffic can pass over the cabling without damage. Due to the distances involved, this can lead to line loss and restricts set design to specific locations that allow access. Productions using generators must also procure costly permits and hire generator operators to bring in and monitor the units during shooting.

What’s more, even before the generator operators (a.k.a. Genny Ops) roll in the 400A generators to energize the grid, the pre-production crew often must use loud, noxious 6k and 2k gas generators for power until the diesel power grid is energized. All of this – the noise, the harmful fumes, the cabling and disruption – is in large part responsible for the growing friction between film crews and the residents of the world’s most famous film cities. This is leading to some neighbourhoods refusing permits for film crews to work there at all.

Decentralization of the power grid is a growing trend within the film industry. Leading professionals, such as David Sinfield and his team – known for their work on No Time To Die, Wonder Woman and Venom 2 – have already moved to a hybrid model. This involves using a reduced number of 400A diesel generators to deliver overall set power, while bringing in clean battery electric generators for peripheral power loads and confined or restrictive locations.

As a result, teams around the world are achieving creative visions that would otherwise be prohibitively expensive or actually impossible. A recent example was found when a crew used Portable Electric’s VOLTstack 2k and 5k electric generators to create a 360° IMAX shot. Due to their emissions-free and silent nature, these units could be placed directly beside the Technocrane holding the camera. The production, in turn, saved the unnecessary double expense of laying out hundreds of feet of cable, only to paint it all out in the editor’s suite.

Some pioneering productions are going one step further by completely decentralizing their grids. A Vancouver-based indie production, The Victim, used only VOLTstack electric generators to park power wherever they needed it for everything from their video village and catering, to balloon lights and HMI lamps during a day and night shoot.

“I had no problem convincing the producers this was a great idea. As far as producers are concerned, no cable, no noise, and instant power on demand is like a dream come true”
– Kerri Coombs, gaffer on The Victim

This simply required a shift in their approach to energy budgeting. “The industry regularly uses 18,000 watt lights for night shooting, which is why most of the night scenes you see nowadays look weird and unnatural, with blue light where all the darkness should be,” explains Kerri.

Instead, they swapped conventional fixtures with LED Skypanels, a staple lighting solution that uses a fifth of the power while achieving the same effect as conventional fixtures. Consequently, not only did decentralizing their grid create huge cost savings on cabling, mats, fuel and production manpower, it also ensured they achieved a powerful creative vision.

“The lighting looked great - we didn’t have to sacrifice production value to scale down our power needs. There were a lot of high fives.”

Whether you’re using a diesel or electric generator, there can be certain risks that come along with generator use on set. A specialized film insurance broker is best able to present the risks associated with your film production to the film insurance underwriter to ensure you receive the best coverage and premium for your production.