Need some inspiration, filmmakers? Check out Front Row’s round-up of the top 20 filmmaking-related channels on YouTube that you should consider subscribing to! 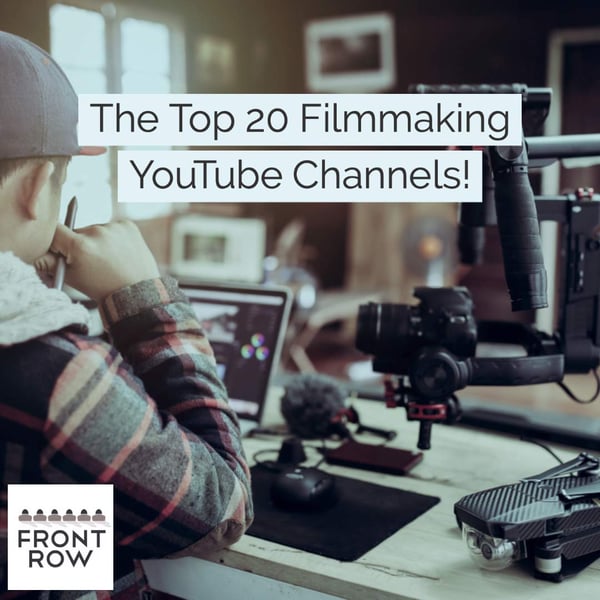 Peter McKinnon is a filmmaker from Toronto who teaches cinematography and photography on his YouTube channel. His lighthearted and amusing personality has no doubt helped him amass the millions of YouTube subscribers he now has. Check out one of his most popular videos, embedded below:

Matti Haapoja is another Ontario-based filmmaker who has amassed millions of subscribers to his YouTube. Matti is a director of photography, originally from Finland.

Matti’s YouTube channel is focused on inspiring people through his videos, traveling to new places and sharing what he has learned with other filmmakers. He has collaborated with global brands such as Nike, San Pellegrino and Visit Norway.

American filmmaker Darious J. Britt has a very helpful YouTube channel geared toward tips and tricks on cinematography, lighting setups, camera techniques and directing. Britt is a graduate of the University of Arizona’s film school.

Britt has directed short films, including Pandemic (2020), about the COVID-19 pandemic.

DSLR Video Shooter is run by Caleb Pike and is a good channel to find the best gear reviews and tutorials for making your videos better.

Pike is an American YouTube creator and filmmaker based in Chicago. Before the channel, Pike was a camera operator and editor working in the corporate and documentary space.

DSLRguide is a YouTube channel from Simon Cade, a UK-based video creator.

This channel has documented lighting challenges with inexpensive equipment, spoken honestly about career mistakes and insecurities and repeatedly tried to understand what it means to be a storyteller.

Film Courage, established in 2009, is certainly one of the best YouTube channels to watch for filmmaking-related interviews. These interviews are with movie business professionals, many quite well known, including director Ted Kotcheff, screenwriters Michael Hauge & John Truby and actor Bill Duke.

Interviews are with filmmakers, actors, screenwriters and authors. Film Courage is run by American filmmakers Karen Worden and David Branin.

Filmmakers Robert Carr and Richard Scott drop filmmaking “knowledge bombs” so that you can make your next film something you are proud to share with the world! Carr and Scott are based in England.

Some of their most popular videos include “100 Low Budget Filmmaking Tips”, “How to Record Stabbing Sound Effects”, “DIY Light Diffusion” and “DIY Overhead Shooting Rig”.

This YouTube channel was created to bring filmmakers together in a creative, positive and fun environment. Whether you work with video, film, photography, illustration, animation, television, music or writing, Filmmaker IQ has information for filmmakers of all skill levels. The channel is hosted by American filmmaker and editor John Hess.

One of their most popular videos is embedded below:

Rubidium Wu is an Australian producer, director and screenwriter based in the US. He hosts this YouTube channel where he shares his professional knowledge, often focusing on technical-related matters around filmmaking.

Based out of the UK, this channel has many tips that can be useful to both new and emerging filmmakers/videographers. This channel is dedicated to helping people take their video production skills to the next level.

Some popular videos include “10 smartphone gimbal moves for beginners”, “How to shoot cinematic iPhone footage” and “How to fake a drone shot”.

Hammond is a doc filmmaker in New York City, known for producing DIY filmmaking tutorials for indie filmmakers, and his award-winning documentary Sriracha (2013).

The Luke Seerveld/Meet The Gaffer YouTube channel is all about the grip and electric department, which includes aspects of video production that affect other departments. Seerveld is a gaffer who has worked in documentary, educational, corporate, commercials and feature production.

Meet The Gaffer includes walkthroughs of gaffer jobs, discussions of new gear, explanations of gear used a lot by gaffers, interviews with other working professionals and opportunities to talk about lighting concepts and aspects of freelancing.

Grip Tips is another YouTube channel focused on the grip and electric department. American gaffer Dave Donaldson provides an in-depth look at all the different tools used to help light a set.

Some of his most popular videos include “C-Stands”, “Walkie Etiquette”, “Grip and electric explained” and “Neutral density windows”.

Lessons from the Screenplay is a channel that analyzes movie scripts to examine exactly how and why they are so good at telling stories. Part educational series and part love letter to awesome films, this channel aims to be a fun way to learn more about films and improve your storytelling knowledge.

Examining the techniques used to tell great stories makes your own writing better, so it should be useful for any filmmaker to give this channel a watch.

Movie City News and The Hot Blog's David Poland (American producer and director) chats with the people who make movies.

Pape hosts this channel, which is dedicated to analyzing film and video editing techniques. Popular videos include analyses of the editing in the movies Dunkirk (2017), Interstellar (2014), Whiplash (2014), L.A. Twister (2004) and Revenge (2017).

Mercedes is a professional audio recording engineer based in Atlanta, GA. On his YouTube channel, he creates impressively in-depth and polished video editing tutorials for Adobe Premiere Pro and After Effects, video and audio production tips, and video/audio tech reviews.

Some of his most popular videos include “How to compress/downsize video file sizes”, “How to trim and cut video in Premiere Pro”, “How to format an external hard drive for Mac” and “What it takes to film a podcast”.

Brandon Li describes himself as “a nomadic filmmaker on an endless world tour.” He has started his own film school and community called Unscripted Studio.

Li has amassed a significant subscriber base on YouTube for his helpful videos that provide filmmaking advice, information on gear, and travel videography best practices. Some of his most popular videos include “Sony lenses for video: choose the right lens”, “Video frame rates: what you need to know”, “Delete the crowds from your travel video” and “5 fast tips for fast-cut editing”.

As the channel name suggests, this YouTube channel is focused primarily on drone photography and videography advice. With the help of the videos in this channel, you can do more with your drones.

Whether you fly a DJI Mavic, Phantom, Inspire or any of the other drone brands out there, this channel helps you make the most of your equipment to produce truly cinematic, professional results.

OK so it’s true, we’re not filmmakers, but we’re passionate about film and the arts, and we have insured many film productions over the years, both large and small. We also have some pretty cool videos on our YouTube channel that illustrate the need for production insurance, including the one below:

If you’re subscribing to filmmakers and videographers on YouTube, chances are good that you’re a filmmaker and/or videographer yourself. And if that is the case, you’ll want to consider insuring your filmmaking gear and film productions. Consider Front Row:

About: Front Row Insurance Brokers Inc. is an independent insurance broker that specializes in the entertainment industry – specifically, the film industry. Front Row has 51 staff in 8 offices that have a combined 530+ years of experience serving the film industry. Front Row is the largest film insurance broker in Canada. Front Row works hard to provide insurance protection at a low cost. Should a claim occur, Front Row works diligently with clients and insurers to expedite the payment of claims. Offices in: Toronto, Vancouver, Montreal, Halifax, NY, Nashville and LA.