The Best Locations for Filming in Vancouver 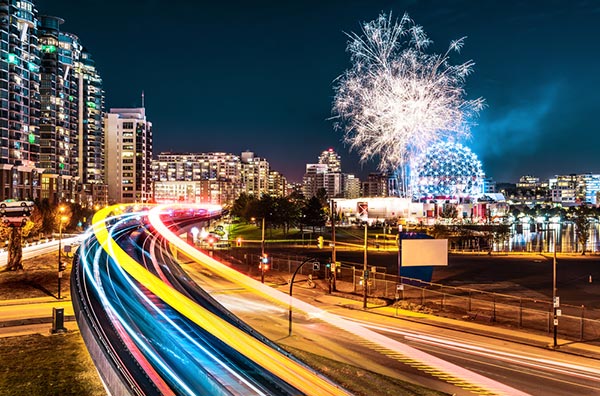 This list is not comprehensive and if you feel we’re missing a location that should be added, feel free to contact us with the suggestion.

We’ll discuss, in no particular order:

Best larger studios for filming in Vancouver, BC

Vancouver Film Studios on 3500 Cornett Road (~15 minutes from downtown Van and ~25 minutes from the airport) has 12 purpose-built sound stages that have been designed to meet the needs of the most demanding film, television and commercial projects.

Since 1963, WFW has equipped Canadian film and TV productions with the most comprehensive and technologically advanced rental inventory in the country.

Bridge Studios is a 15-acre site that is ~30 minutes from the airport and ~15 minutes from downtown Vancouver. Film equipment, service and labour are all readily available in the immediate area.

Bridge Studios opened in 1987 and the facility includes 13 sound stages and a full complement of support and office space. 75,000 sq. ft. of wardrobe prop and shop space available in auxiliary buildings.

Martini Film Studios is located five minutes off the 200 St Highway 1 Exit, making it easily accessible from the airport, downtown Vancouver and the US border crossing. Martini has four studios and 10 sound stages; all studios are constructed of tilt-up concrete, with acoustical insulation.

North Shore Studios has eight stages with the largest one being 20,544 square feet. North Shore also has production offices, support services and a zero waste/“Keep it Green” program.

Notable production shot there: Things We Lost in the Fire (2007)

Best smaller studios for filming in Vancouver, BC

Stage 6 is a film studio located on 65 East 6th Ave, Vancouver, and is ideal for film, photography and everything in between.

The stage is 2800 sq. ft. and includes a truck height loading bay, on-site lighting, wardrobe rooms and a security system.

Ideal for small to medium sized shoots and pick-up shots. There is also a partial loading bay and monitored alarm system with security cameras on site.

Farawayland is a smaller studio of about 750 sq. ft., located in the Gastown neighbourhood of Vancouver. The studio has a shower, microwave, kitchen, high-speed internet and a projector.

This studio can accommodate film/video shoots with multiple camera angles and lighting against a plain backdrop, bricks or green screen.

The studio is conveniently located in Burnaby, ~20 minutes from downtown Vancouver.

“A natural light studio with a big heart.”

This 735 sq. ft. studio is also located in the Gastown neighbourhood of Vancouver. The space has been created to provide the film and photo community with a big open space to create art and community.

The studio is associated with the award-winning film production company, Pachamama.

Best churches for filming in Vancouver, BC

St Paul's Anglican Church on Jervis St in Vancouver is a beautiful space that includes on the floor of the parish hall a full-scale replica of the medieval labyrinth found at Chartres Cathedral in France.

Various film and TV productions over the years have used this church for filming.

Notable production shot there: MacGyver episode "There But for the Grace" (1991)

St John’s Shaughnessy Anglican Church on Nanton Av. in Vancouver is a smaller church that can accommodate about 450 people. The church has been used for filming various film and TV productions.

This church contains some beautiful stained glass windows. Many of the windows are memorials to those who fought and died in World War II.

The cathedral contains an impressive pipe organ and some beautiful stained glass windows. This church is listed on the Vancouver Heritage Register and is a legally protected building.

Quite a few movies and TV shows have been filmed at St. Andrew's-Wesley United Church over the years. This Gothic Revival church opened in 1927. It is located in downtown Vancouver on Nelson St.

This church features a high vaulted nave, deep transepts, abundant light and the sanctuary has stunning stained glass windows in the French and English style.

The Unitarian Church on W 49th Ave, Vancouver, has also been used for various film and TV productions over the years. This church was established in 1909, has many active groups and committees, and offers space to various organizations.

The church has two labyrinths on the property. One is a classical three-circuit square and the other a double-processional labyrinth in the garden on the west side.

Best other locations for filming in Vancouver, BC

Murrayville Hall in Langley is a community memorial hall that can be used for various events, including film productions. The building is located on the unceded, traditional, ancestral territories of the Kwantlen, Matsqui, Katzie and Semiahmoo First Nations.

The Water St. Café has been used as a film set on various film and TV productions and it is easy to see why: its high windows allow in lots of natural light.

Located across from the steam clock in Gastown in the stone-clad heritage building, the Edward Hotel.

Established in 1975, VanDusen is a beautiful botanical garden in the Shaughnessy neighborhood of Vancouver. The garden has been used many times over the years for filming and photography.

Vancouver Public Library (VPL) welcomes TV and movie filming at the Central Branch as well as the 20 branches in the VPL system. The Central Branch is one of Vancouver’s most recognizable landmarks.

Filming on exterior spaces is possible during the day but shooting inside the libraries can only be done when they are closed.

Many filming locations are available to rent on Locationbase.ca, including this one, Creative Community Space, which is a fun non-profit artist space and venue. The space includes a gallery, kitchen and outdoor courtyard.

Contact Location Base to request their Front Row coupon code for $50 off short-term production insurance.

If you’re researching filming locations in Vancouver, chances are good that you’re a filmmaker or film producer; if that is the case, you’ll want to consider insuring your valuable filmmaking gear and film productions. Get a fast quote from Front Row Insurance and buy online:

Refer a Friend to Front Row

We’ve setup our referral marketing program and if you refer a friend to Front Row, you could win a $15 Amazon eGift Card OR be entered into a random draw to win a $99 Amazon eGift Card! (depending on your province)

About: Front Row Insurance Brokers Inc. is an independent insurance broker that specializes in the entertainment industry – specifically, the film industry. Front Row works hard to provide insurance protection for a very low cost. Should a claim occur, Front Row works diligently with clients and insurers to expedite the payment. Offices in: Vancouver, Toronto, Montreal, Halifax, NY, Nashville and LA.