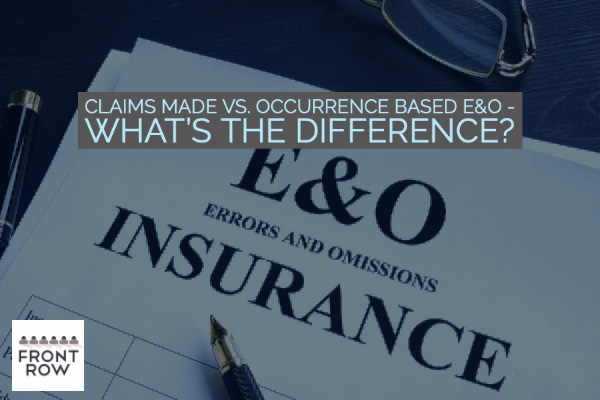 Claims Made E&O Policies cover claims that are made during the policy term. The loss may have occurred in the past, but as long as it is reported during the current policy term, it can trigger coverage. In order for coverage to continue, the policy must stay in force.

With this type of policy, endorsements can be made so that the policy responds to incidents which occurred before the policy start date, also known as “Prior Acts” coverage. Tail coverage is another extension that can be obtained wherein the insurer will cover events that occur while the policy is in force, but which the insured is unaware of during the policy period, and are reported to the insurer after the policy terminates. By obtaining tail end coverage, the claims based policy is in effect converted to an occurrence policy.

A benefit of this type of policy is that if a claim arises relating to incidents which occurred before the policy start date, the claim may be covered. Another reason why this type of E&O policy is purchased is because it is less expensive than occurrence based policies. Typically, the premium increases over the first five years of coverage in increments proportional to the claims reporting for that experience.

Once a “claims-made” policy has expired, purchasing insurance for past events will become difficult, expensive and perhaps not possible. Once coverage has expired, claims can no longer be submitted, even if the claim occurred during the policy term.

Occurrence Based E&O Policies cover losses that occur during the policy term as long as the project/film is released or broadcast during the dates at which an incident causing damage occurs. Although the loss can be reported years later, it must have “occurred” during the policy term. This type of E&O policy may not cover occurrences that happened prior to the policy being in force.

This type of E&O policy is typically more expensive than claims based policies because the insured is prepaying for tail costs whether the tail gets used or not. Another disadvantage is that if a claim arises before delivery to the broadcaster or distributor, any defense costs associated with the claim may not be covered. It’s important to speak to your broker about whether Prior Acts coverage is included on your occurrence based policy.

WHAT CAN AFFECT THE COST OF AN E&O POLICY?

Get the Producer's E&O eBook: